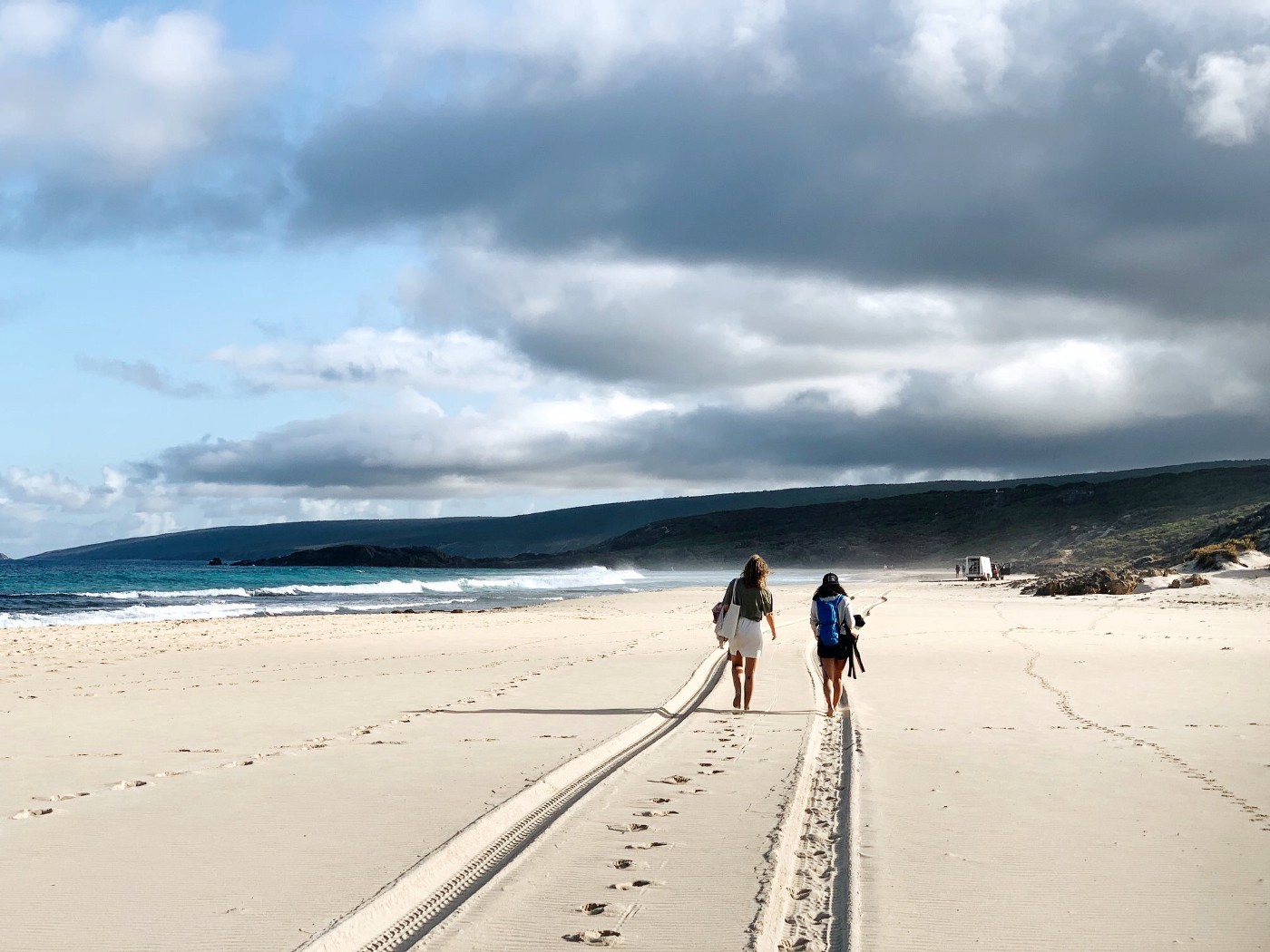 A Year Around the Sun: Break Ups, Scuba, Expatriation & Self-Actualization.

A year ago, I faced my biggest fear head on. I broke up with New York City. A breakup that was coming for quite some time, I just couldn’t get out of it. Better put, I didn’t know HOW to get out of it. Sound familiar? I’m sure it does. We’ve all been in those relationships where we just can’t let go.

Since the age 15, I have been in love with NYC. The energy, people, skyline. But above all else, what the city itself represents — endless opportunity. From that point on, I had one goal and that was to make it in the city that never sleeps. Everything thereafter revolved around making it happen.

Throughout my life, I always felt inadequate. This was largely self inflicted, but also came with the territory. Growing up in the suburbs of Philadelphia, there was a rigid framework that defined success and worth. It went something like this: go to a great high school, get an exceptional score on the SATs, be a captain of a sport team (or two), get into a leading college, graduate top of your class, get a competitive job out of school at a world-renowned institution, move up the corporate ladder, fall in love, get married, buy a house, have a kid (or three) and then, only then, had you reached the pinnacle of successful. The pressure to be this type of person at such a young age was normal for us. In addition, the content and media we were constantly consuming informed us that New York was in fact where you had to be to achieve all of this greatness.

Naturally, I never fit into this predetermined framework. I wanted to, but I had to try really hard. And because of it, the feeling of not fitting in—not being good enough—drove a lot of my decisions early days. I thought if I could prove myself in NYC, then the rest would fall into place as it should. So, I was on a singular mission and nothing was getting in my way. How this all manifested?‍

Into a deep fixation on my professional pursuits.

I was that exuberant 20-something that got in first and left last, worked weekends, slept at the office, had multiple jobs while building my own business on the side. I was the first to bail on plans with friends to keep working or miss a family event because I was at the office. I had taken the whole “New York State of Mind” thing to another level. I recall one week sleeping about an hour a night for five days straight, as I was working 2 jobs simultaneously. In those moments, I fundamentally believed that’s just how you got things done. And the truth was, I loved it! This way of life defined me.

Then something happened right when I turned 30. One day at random, I was sharing my deep love of the ocean with someone. They asked me if I had ever tried scuba diving. I hadn’t. The thought had never crossed my mind.

Let’s rewind a bit here: my number one passion since the day I could talk was marine life. My first word was fish. Not mom, not dad — FISH. I loved ocean life so much that, as a child, I carried around a marine encyclopedia, sharing fun facts with whoever would listen. I was gifted a plush whale after my first trip to an aquarium and it still travels with me everywhere I go. So, how could someone, so deeply obsessed with the ocean, never have even considered what life might be like … living by an ocean? Or spending time in it for that matter?

This was an example of one of the many things that had me firmly situated outside of the fundamental success framework throughout my younger years. And along the way—as I tried to adapt to my surroundings—I had totally lost sight of this. I learned later that, as a crutch to overcome my insecurities, I abandoned this interest for a more conventional pursuit of capitalistic success. A way of thinking that governed my life for years to come.

After that conversation, I started to ask questions. Lots of them. Questions that I’m sure are not foreign to you: Why am I working so hard? What am I working towards? What am I spending my days doing? Do I like what I’m doing? What’s my purpose? Who am I? Why do I still feel inadequate? Why have I never tried scuba diving?! It seemed like I somehow skipped over asking myself a lot of these questions for my entire existence, and now, it was totally flooding my system. Was it bad that I never dove much deeper with my own self?

I grappled with that question quite a bit.‍

I felt confused, lost and totally freaked out that I had finally gotten to this place I dreamed of my whole life, and now was questioning everything. This made me feel even more inadequate. Two years went by and I was in a strange daze. Nothing seemed to fit—a feeling I was far too familiar with. These questions were burning in my mind at all times, no matter what I did. I tried changing the things I could control in my day-to-day to shake it—in the only way that I knew how. You know, taking on more projects, trying harder at work, switching jobs—those types of things. But nothing worked.

Then the harsh reality hit me. Maybe my way of thinking for all this time was rather one dimensional? Maybe my goal of moving to New York and forcing this predetermined framework wasn’t for me? Maybe my definition of success was off? Maybe I abandoned what I truly loved? Maybe there was more to me that, for all these years, was trying to come out?

So, what started as a simple, small, seemingly insignificant conversation about scuba diving two years ago, turned into something so much more. A move around the world to Australia, in fact. The most asked question of 2019 — “why?” Why would I uproot my whole life in NYC to move to a place that looks so different from what I’ve historically called home, and so far away? I did it because I realized I only knew one way. That way is incredible, don’t get me wrong. It taught me how to push towards a north star, build exceptional relationships and rival anyone when it comes to work ethic. I wouldn’t trade it for the world.

I did however, close off many other facets of my personality — as if they never existed — when, at one point, they were so prevalent. I shut off things about me that actually did define me as a person, well beyond my professional endeavors. Now, it was time to turn that side back on and see where it took me. Now was a chance to strengthen myself as a person in a way that I had never done before. And most importantly, now was my chance to finally strike a balance between my personal and professional sides — something that I now understand is critical if you want to find success in life. Something that I’ve never had.

And yes, I wanted to live on and in the biggest, baddest, coolest stretch of ocean there ever was!

This move has been a wild ride. There have been good days, bad days and all those in between. But I have never learned more about myself than I have in this last year. That in itself has made me feel like more of a success than anything. Coming to these realizations, acknowledging it and making a much needed change has been the biggest accomplishment of my life to date. And understanding who I am and what I love most has been the single greatest highlight of my young adult life.

So, why share all of this with you? I hope my journey to the edge of the earth can help you in some way.

Don’t wait to face those hard questions. You know what they are and you need to ask yourself those things head on. It could hurt to ask, as you might not like the answers. But I learned you won’t understand or achieve YOUR happiness without doing so. If you want to figure out who you are, all you have to do is ask. And once you have some clarity, figure out what you need to do to make it your reality. Define what it will take to make things happen for you, in the way you want it to unfold.

Use your network, reach out for support. So many of us have lived through similar things. The power of human connection is simply amazing when it comes to tackling these big, life questions. Get smart, learn, read and become knowledgeable on what it’s going to take. And then, just go for it. No holding back. Take the advice of those you care about — pair that with your learnings — and then make the right decision for you. A decision where you can strike the perfect balance in your life both professionally and personally.

Understand that life is an ongoing journey, and it’s the most beautiful thing in the world. By taking every win and loss for exactly what it is—and owning those moments—your mindset will start to shift into a much happier state. Because at that point, you’ve accepted these things are all part of a magical process we are so fortunate to get to experience, and not just about sprinting to the finish line.

And with that, you build incremental trust in yourself. You stop worrying about what others think or what conventional framework of success you fit into. You define those things for yourself. You start to put those inadequate feelings aside — the ones we all have — and realize that you have the ability to do whatever it is you set your mind to if you’re honest with yourself.